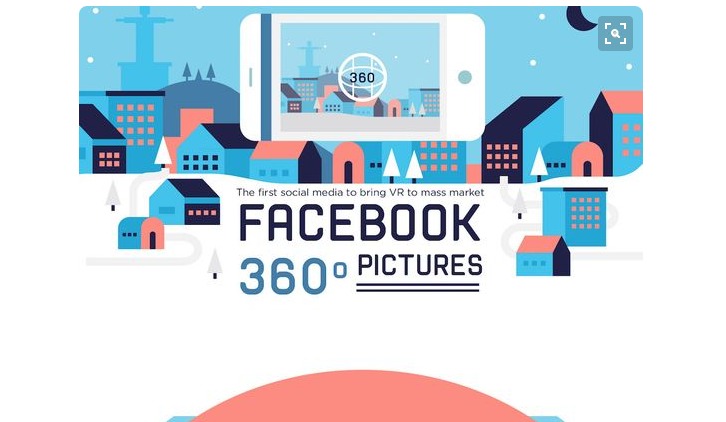 The moment everyone’s been waiting for has finally arrived! Who would have the thought that the day would come where our smart phones could take photos with a panorama camera that we could then post on Facebook and in return create a virtual reality of the place we’re in. Welcome to Facebook 360 Pictures!

Smartphones are becoming more competitive by the day. New and improved camera phones are continuously being introduced. Yet, the best camera phone according to Facebook’s guide is Apple’s iPhone starting from 4s up to 6s due to the 360 camera included in it. Still, the Samsung smartphone including Galaxy S7, S6, S5 and Note 5 and 4, is also very compatible with Facebook 360 Pictures.

Moreover, iPad mini 2 to 4, iPad Air and iPad Pro also work well as they all acquire the 360 camera iPhone possesses, as you can see in the descriptive infographic provided below.

You no longer need a 360 camera or any additional accessories to capture a panoramic photo. Using a 360 camera app with your iPhone or Samsung smartphone, you are now able to take a 360 photo of your surroundings.

Facebook considers the best app to capture a 360 panoramic picture to be Google Street View compatible with iOS and Android. Google Street View allows you to discover farfetched landmarks, explore world wonders and experience the insides of various places posted by others. This including museums, sanctuaries, restaurants and so forth. Once you have downloaded this app for free, you can start creating your own photo spheres.

Still, any app supporting Photo Sphere XMP metadata is also compatible with Facebook 360 Pictures, including Google’s Cardboard Camera app and the Samsung Surround Shot mode. Additional details can be found in the infographic included below.

Through Google’s Cardboard Camera app, you can now take VR photos, in which moments captured can be relived. Through the cardboard camera you can also hear the sounds as they had sounded during the time the photo was captured and revisit that moment in time. (The google cardboard viewer can be ordered here, and prices start from £15)

As for Samsung Surround Shot mode, it is considered to be Samsung’s version of Photosphere. It is a downloadable plugin that can be installed for free through the Galaxy Apps store. This app will allow you to create a spherical panorama or your surroundings, by combining several shots that make up a 360 view of the place you want to capture. Further tools are included in the infographic provided by eReviews which can be viewed below.

Still, Facebook is looking towards converting panoramic photos from a smartphone’s build in panorama camera in the near future, where you won’t need an additional app but solely the panorama camera built into your iPhone or Samsung smartphone.

Once you have sorted the best camera phone you will be using, downloaded your favorable 360 camera app and now would like upload your photo onto Facebook, how will Facebook convert your photo into a virtual reality?

Facebook looks into each photo’s camera specific metadata. Which is included in photos taken using 360-ready cameras or 360 camera apps and this information can be found in a picture’s XMP or Exif tags. Likewise, Google’s Photo Sphere XPM easily identifies a photo’s metadata with 360 content which is then processed by Facebook and converted in a VR photo. Moreover, other identification tools involve image stitching PTGui and then exports with Photo Sphere metadata.

Evidently, the best camera phone is now able to bring a photo to life. Through your iPhone or Samsung smartphone your reality can be shared with people in all corners of the world. merely using a panorama camera along with a 360 camera app.

Now that you know how Facebook 360 pictures works, you can finally be part of the newly improved VR era that is bound to revolutionize the world of the camera phone.